A few days ago Automattic shot an official date for the 4.4 release and handed us a beta for testing back in 21st this month. We were kind of sure we are going to get another beta within a week, and voila we have beta 2. So, I tested it locally and read the documents. WP is just getting better and better and with the update in December things are going to take the web into the next level as WP already holds the largest chunk of web. 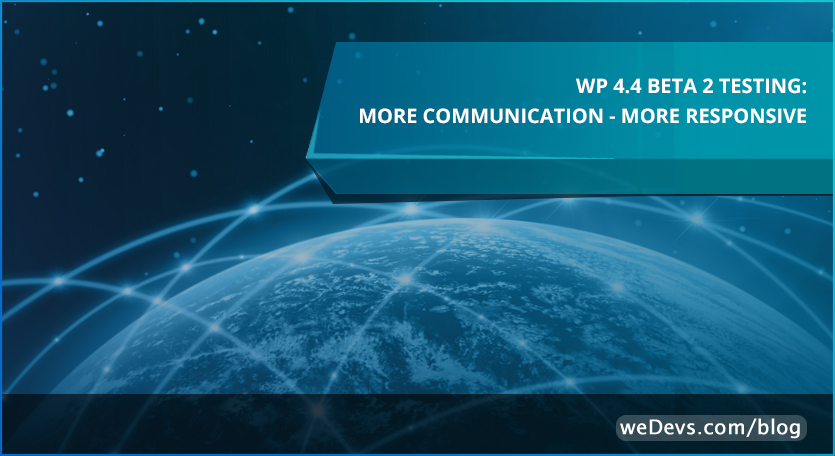 I am going to touch only three of the several feature tweaks that are coming to keep things simple, you can read the detailed list of changes and major discussions by following this article.

WP has been working on hard this entire year to make sites as much as mobile friendly as possible. We received cascaded menus in the 4.3 release which created a collapsible menu from the sidebar items or the top panel instead of breaking them. The menu would automatically appear if you are on a smaller screen/device like a cell phone or a tab or if you simply resize your browser to be smaller. This time, they are taking a step further by making the images responsive as well. When you upload an image to WordPress it automatically resizes it to 3 different smaller sizes.

For example: If you upload a 1500px wide image it will be resized automatically in the background like –

Similarly responsive images are going to add srcset and sizes support to WordPress.

It is only logical that smaller screens do not need image resolutions beyond what they can display. Loading full sized images will not only put processing pressure on the device, but also use data unnecessarily on mobile devices and most importantly slow the page loading time. We want things fast and we want them running fast. Almost 80% of the contents of most sites are images. With this introduction, I think we can hope to run multiple tabs in the browser without much load from the content of the site and also load sites faster.

Hurrah! Now your WP powered site will be able to communicate externally with literally anything by default. The much awaited and anticipated JSON REST API is finally getting merged into WordPress core and this is from discussion to reality, the actual stuff. I was so excited that I mistakenly wrote and almost published that it was added to the 4.3 update. I can say to myself, I am not wrong now!

The REST API is ready for testing and you can read more about it on the proposal. This is their main idea of doing it in two steps.

The plan we’re aiming for is a two part merge of the API. For the first stage, the infrastructure code would be merged into wp-includes and made available for plugins and themes. This is an internal API only, but offers an “API construction kit” for developers to use. For the second stage, the endpoints would be merged, and the API would be enabled for sites by default.

You will be able to embed any kind of rich content to WP posts directly from this update and onward. By using the oEmbed API they even aim to embed entire websites within a post. Nice!
Check the proposal here.

Other additions to the beta include a new default Twenty Sixteen theme, term meta (wp_term), improved <titles> and several improvements for comments.

This article has been written based on news from the official WordPress Blog, make.wordpress and wptavern.com